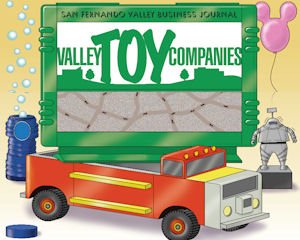 There are few, if any, misfits in the Valley’s toy industry.

From the consumer products divisions of behemoths such as The Walt Disney Co. and Warner Bros. to smaller players such as Do-A-Dot Art and SOTA Toys, area toy companies cater to just about any consumer whim, dream or interest and collectively generate billions of dollars in annual sales.

Over the course of decades, the Valley has become the cradle of creativity for the world’s toy industry, benefiting from the proximity to the entertainment business and a diverse population that can provide ample testing opportunities. And in true Valley fashion, the players are interconnected, whether through licensing deals, corporate roots or family bloodlines.

Six of the 11 companies profiled for this Special Report stem from a family toy business or are currently functioning as one — not surprising considering the highly competitive and secretive nature of the industry.

Peter Wachtel, president of The Toy Association of Southern California, says the Valley’s toy industry is made up of a small pool of big shots where “everybody knows everybody.”

This rang true during the selection process as many of the companies in this report were referred by various sources and connections within the industry. Some were discovered through their involvement in local associations such as The Toy Association of Southern California. They all have one thing in common: they’re fun, innovative companies with recognized core brands and products.

· Companies, retailers, wholesalers and distributors collectively account for an estimated 85,430 jobs in California, business taxes in excess of $1.1 Billion and a total economic impact of more than $15.8 Billion, according to the Toy Industry Association.

· The top 5 children’s licenses across product categories for the 12 months ending August 2011 were Cars: The Movie, Disney Princess, Dora The Explorer, Star Wars and Toy Story, according to The NPD Group. They each generated anywhere from 7 percent to 3 percent of total licensed product sales.