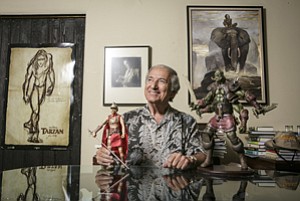 Three years after the box-office fiasco of “John Carter,” the licensing company that owns the namesake character is looking for a studio to revive the fortunes of the 103-year-old interstellar adventurer.

Edgar Rice Burroughs, the same writer who invented Tarzan, created Carter in 1912 as a Civil War veteran who travels to Mars...