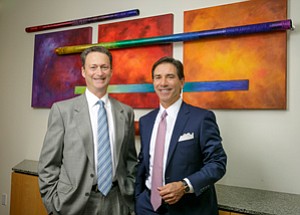 In 1974, Nicholas Roxborough and Drew Pomerance met in a dormitory at the University of California at Berkeley. After attending law school and gaining some professional experience, Roxborough asked his friend to help him try a case against a large workers’ compensation insurance carrier. They won a $20 million verdict against the State Compensation Insurance Fund, and in 1996 decided to form their own firm, known today as Roxborough Pomerance Nye & Adreani LLP. Now 40-plus years after they met, the two, along with partners Gary Nye and Mike Adreani, continue to build their successful Woodland Hills practice. The firm has won some landmark verdicts over the years and currently has a case before the California Supreme Court after winning a judgement of $90 million that was thrown out by the court of appeals. In addition, they represent a couple of small businesses in a lawsuit against mega-developer Rick Caruso, the billionaire behind shopping centers like the Americana in Glendale and the Commons in Calabasas. But even with the daily stresses of trials and litigation, Roxborough and Pomerance put their friendship first.

Hobbies: Coaching his kids’ soccer and baseball teams and skiing.

Most Influential People: His father, Jerry.

Pomerance: I had a great childhood. I still consider myself in it as we speak. We had a close family, had lots of friends and didn’t have to overcome any great hardships. We played a lot of sports. I grew up being a USC fan, because my dad went there and took me to all the games.

Roxborough: After coming back from Africa, I went to England for a short period of time. At that, time Tanganyika (Tanzania), East Africa was a British colony. My dad signed a contract and was there for two years. After I was born, we went to London, which is where my mom and dad originally met. Then, I grew up in San Francisco and loved every minute of it. Everywhere you would go, you would just have fun.

When did you know you wanted to become a lawyer?

Roxborough: Eighth grade. Perry Mason show. That was it for me; 100 percent.

Pomerance: I was in high school debate and thought that (being a lawyer) would be pretty cool.

How did you meet each other?

Pomerance: I went up to Berkeley, and Nick went to Berkeley. We were freshman at the same time, and we were both placed in the same dorm. I met him in the bathroom, and we started talking. He lived on one end of the first floor, and I was on the other end.

Roxborough: Drew put together a softball team and said, “Hey, do you play softball?” That’s how I really got to know Drew and a lot of his friends. The whole dorm became a softball team. We actually made it to the championship and took second place our first year. We were pretty good.

Roxborough: I take the fifth.

Pomerance: It was Berkeley in the mid-to-late 70s, so it was a lot of fun. There was kind of a core group of us from the dorms and some other friends that hung out together. We ended up living together second and third year. I will tell you, when Nick and I were seniors, we roomed with a friend of Nick’s who didn’t go to Berkeley, but Nick had known him from San Francisco. One day, he was the last to leave and forgot to blow out one of his candles in his room. The entire apartment caught on fire. I remember walking back from class with Nick, and we see all these fire engines out. A friend said, “Wouldn’t that be funny if that was your apartment that was on fire?” And of course, it was.

Did you have any reservations about going into business together?

How did you test the waters?

Roxborough: Drew was a partner at a prestigious Beverly Hills firm, and I’d gone on my own for a while. Drew wanted to come over, and he became of counsel (employed to aid in a particular case or cases). And what we did was we knocked it out of the park as a team. We took on these trials in the mid-90s before we became partners and not only did we win and beat one of the biggest law firms in the country repeatedly, but we had a blast. I mean we were tired; we were exhausted. But there were times where we were down there before witnesses, and Drew and I were laughing hysterically. We were telling jokes and opposing counsel was like, “What’s wrong with these guys? They are so immature.” And in the meantime, we kicked their butts and had a little bit of fun along the way. That’s what made it special. Then Drew and I decided we had to pull the trigger. It was the best thing we’ve done.

Pomerance: I was renting space from Nick, who had several offices on the 15th floor of a really nice building on Wilshire Boulevard in Westwood. I had left the firm that I was at and just decided to launch out on my own. Nick said, “Why don’t you come over here? I have an extra office you can rent from me.” That’s when he told me that he had some cases coming up that he may want me to help him try. What we were doing was very compatible, so it was pretty seamless.

Roxborough: Why would I bring some unknown person when I knew one of my best buds is one of the smartest lawyers in California? We put together an agreement and were both very concerned about preserving the friendship. Nothing changed, so that was a great way to work together.

When did you know this was going to be a successful practice?

Roxborough: When we won our trials in 1995. In context, these weren’t personal injury cases, these were new-area-of-the-law cases. We were the David, and the insurance company was the Goliath and its law firm was the Goliath. We just had a few attorneys, and they had hundreds at their disposal. We figured if we can beat this firm and this carrier, we have a pathway to success.

Why did you decide to specialize in employment and workers’ compensation law?

Pomerance: We became, and are, a full-service business law firm. But what seems to be the most prevalent types of litigation for a business are insurance and employment.

Roxborough: Workers’ comp is the third largest line item for California businesses after rents and salaries. So, workers’ comp is a line item CFOs look at all the time. We recognized that very early on.

How did you know Gary Nye?

Pomerance: I had hired Gary out of law school when I was an associate at another firm. Then, I went to a Beverly Hills firm and told my partners at the time that we should hire Gary. I left, joined Nick, but we (Gary and I) remained friends and stayed in touch.

When did he join your firm?

Pomerance: On a Saturday morning in January of 1999, Gary calls me up and says, “Hey, you want to grab some breakfast? I want to tell you what’s going on.” So, we go out to breakfast, and Gary says, “I sense some things are happening in my firm, and I wouldn’t be surprised if in six to nine months, our firm broke up.” He says, “If we did, would you guys be interested in me coming over?” I said, “Absolutely, it’s a perfect fit.” Forty-eight hours later, Gary calls me and says, “We broke up. Can I come over?” He was over that day, sat with Nick and I and talked about his practice. The next day, he had his files in our office, and we were Roxborough Pomerance and Nye. That’s literally what happened.

What about your other partner, Mike Adreani?

Pomerance: Nick and I were working on our class actions, and we had some administrative stuff at the Department of Insurance. The department had an intern named Mike Adreani, and one of the people at the department calls Nick and says “I have someone who might want to clerk for your law firm.” He clerked with us, and we made him an offer out of law school. He becomes an associate, and after six or seven years as an associate, he becomes a partner. A few years later he’s a main partner. So, there are four of us, and we’re all really close friends. The wives all get along great, and the eight of us like hanging out together.

How does your friendship affect company culture?

Pomerance: Our friendship has definitely made it a better culture for the people here. Everybody takes their ques from the top, and your culture comes from the top. I think if you ask people here, they would say this is kind of a fun place, and the four partners are all fun and kind of goofy and make things more enjoyable.

What would you say is your most memorable case?

Roxborough: There were a series of cases in the ’90s that put us on the map. It wasn’t one case, but a series of wins. When you win the baseball game 8 to 7 and you score runs throughout the whole game, you can’t point to one inning that was pivotal. Usually, you can just say without all those runs, you don’t win the game. I think there have been so many victories along the way that they all matter.

Can you tell me about the Rick Caruso case?

Pomerance: The Grove, the Americana, the Commons – these are great developments. But he’s going to start a development in the Palisades Village at Swarthmore and Sunset. He bought up a lot of the real estate but didn’t buy up all of it. What he bought up, he would relocate tenants or buy them out of their leases or pay them up. Well, there’s one building that he didn’t buy, and I have two clients who happen to be in it.

Pomerance: He started the construction, and the construction is killing their business. There’s dust; there’s noise; there’s fumes; there’s no parking anymore. So, I have two clients who have been there since the late ’80s to early ’90s who are fixtures in the area and are getting killed. The thought is yes, you can build these nice developments, but you can’t kill businesses in the process. You have to accommodate them, so we’ve sued under a theory of nuisance. We just filed the lawsuits, so we’ll see how it goes.

What advice would you give to other lawyers trying to form their own practice?

Pomerance: You have to believe in yourself. Be passionate about it and don’t be afraid of a lot of long, hard work. You have to be committed to do this.

Roxborough: Ditto to everything Drew said and I’ll add you have to make clients realize that you’re fighting for them. You have to share with them the passion you are feeling about the case.