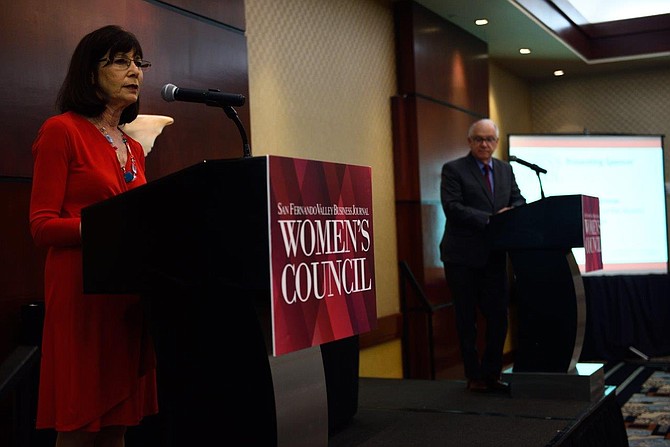 The CEO of the Year Award was presented to Princess Cruises President Jan Swartz. Holly Schroeder, leader of Santa Clarita Valley Economic Development Corp., accepted the award on the absent Swartz’s behalf. From its Valencia headquarters, Swartz runs the third-largest cruise line in the world with a fleet of 18 ships that carries 1.8 million passengers annually.

The Lifetime Achievement Award went to Sheryl Mazirow, owner of the Thousand Oaks-based tenant brokerage firm Mazirow Commercial. Mazirow added this award to a long roster of honors, including being named Business Owner of the Year by the Business Journal in 2017.

The Gelb Group’s Gloria Pollack received the award for Nonprofit Leader of the Year. Pollack spent four decades as a teacher and principal. After retirement, Pollack joined forces with Rickey Gelb, and from that friendship, the Gelb Charitable Scholarship Program was born.

Two women won Rising Star awards. The first went to Kathleen Fellows, associate attorney at LightGabler in Camarillo. She has worked for seven years as a civil litigation attorney and volunteers at the Juvenile Justice Center with members of Women Lawyers of Ventura County.

The second Rising Star of the Year went to Vice President and Business Banker of Mission Valley Bank Paula Bahamon, who serves on the board for MEND, a nonprofit serving the economically challenged in the San Fernando Valley. Bahamon recently joined the advisory board at Woodbury University in Burbank.

Business Executive of the Year went to Precious Mayes, who has served as chief executive of Pacifica Hospital of the Valley since last May. Mayes has been credited for leading a management team to execute a plan that was successful despite the financial hardship of the hospital. The transformation she led reversed years of massive losses, even as, at one point, the Department of Water and Power was ready to turn off power and water, which would have resulted in the immediate shuttering of the hospital.

Volunteer of the Year Award went to Teresa Todd, the 2019 chairwoman at the Valley Industry Association, a volunteer position to infuse energy and leadership into Santa Clarita’s business-to-business organization.

Executive Assistant of the Year Award went to Kristine Anne Chatari, who for four decades worked as a legal secretary at a large law firm in Anchorage and currently works at LightGabler in Camarillo.

CSUN President of the Alumni Association Cindy Chernow and Manager of the Valley Crossroads District of Wells Fargo Veronica Omar presented the awards.