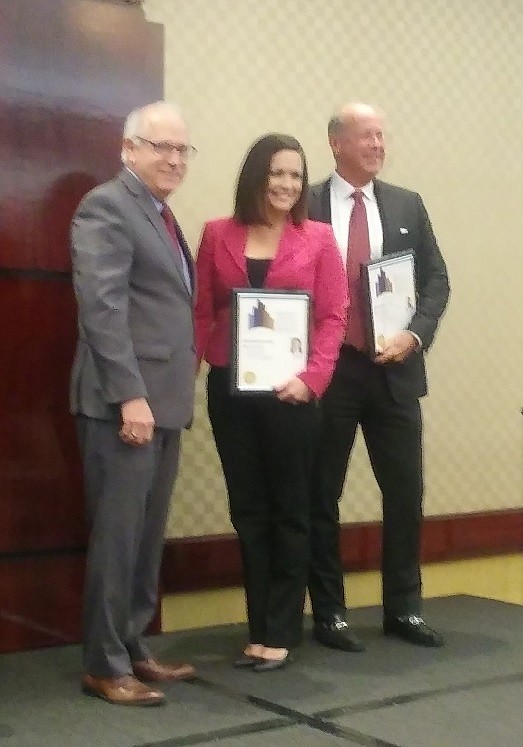 “The real estate industry has always been one of the drivers of the Valley’s economy,” said Charles Crumpley, editor and publisher of the Business Journal and master of ceremonies for the evening. “Tonight, we’ll pay tribute to the market’s top brokers and broker teams. We will also recognize the biggest, best and most notable projects throughout the region that were completed last year.”

Here is a run-down of the top award winners.

 Gold Award for Best Medical Sale went to Angie Weber and Dana Nialis from CBRE, who represented the seller in a $28 million transaction for a building on the Henry Mayo campus in Valencia.

 Gold award for Best Multi-Family Sale saw Ryan O’ Connor of Lee & Associates in the Sherman Oaks office win for the sale of a 33-unit complex in Palms.

 Melinda Russell of CBRE scored Best Multi-Family Sale gold for brokering the sale of Park Madera Apartments, a 169-unit complex in Port Hueneme at a price of more than $37 million.

 For Best Office Lease, Todd Doney and Matthew Hargrove of CBRE won for representing tenant Warner Bros. as well as the landlord in a 456,000-square-foot lease at Studio Plaza in the Burbank Media District.

 Gold award for the Best Office Sale went to Michael Slater, Tom Dwyer, Todd Tydlaska and Mike Logo of CBRE for representing Dole Food Co., in the $50 million sale of its Westlake Village headquarters to the Hilton Foundation.

 The Gold Award for Best Retail Sale went to Cory Stehr of Lee & Associates, who, back in 2010, first cold called the owners of Space 15 Twenty in Hollywood. Through persistence, he beat out national listing firms in late 2017 to market the property, selling the property last May for $61 million.

 Barbara Perrier scored top honors as Gold Award Broker of the Year. The industrial leasing broker, who began her San Fernando Valley career with CBRE 30 years ago, has been among the company’s top 3 percent of producers.

 Gold Award for Best Mixed Use Project went to Talaria Burbank for a 480,000-square-foot apartment complex with a Whole Foods on the ground floor.

 Gold Award for Best Tenant Improvement went to Amerihome Mortgage Co. This mortgage lender in Westlake Village is growing rapidly, and it wanted 80,000 square feet renovated in only nine weeks. JLL, Parker Brown and Klawiter and Associates worked on the project.