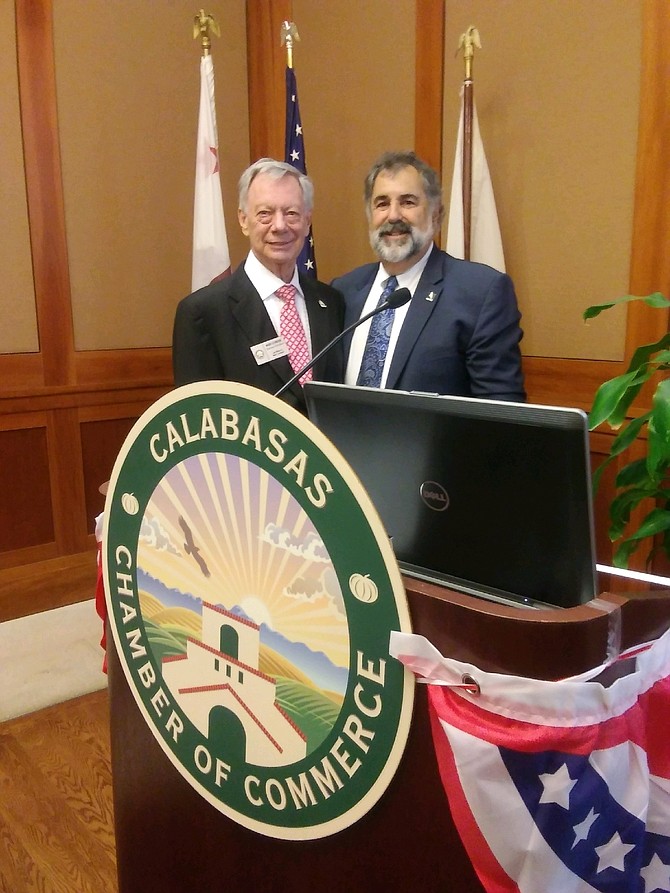 The city of Calabasas on Thursday celebrated the arrival of new mayor David Shapiro with its annual Mayoral Luncheon that doubled as a state of the city event.

Calabasas Chamber Chairman Mark Levinson served as the master of ceremonies, introducing longtime Calabasas resident Ross Porter to the podium. The sports announcer, who has lived in Calabasas for 38 years (a good decade before the community became incorporated as a city in 1991).

“Calabasas is the jewel of California,” said Porter, who for 10 years worked as a local NBC sports anchor and for 20 seasons was a Los Angeles Dodgers color commentator. He complimented Shapiro for his civic authenticity.

“This mayor is not a politician,” Porter said. “(He) keeps Calabasas safe, clean and wholesome. He has the residents’ back.”

After taking to the podium, Shapiro — standing before his wife Barbara, his daughter Samantha and one of his two sons, Alex — looked out into the “overpacked” room and said, “I thought everyone was here for a Kardashian pop-up,” alluding to Calabasas’ most famous celebrity family.

Shapiro, who was first elected to City Council in 2012 and whose mantra became “Shop Local,” appeared particularly proud of such community achievements as Calabasas’ ban of single-use plastic straws, stirrers and cutleries and a recent restoration of Las Virgenes Creek, where 1,000 native trees were planted.

Shapiro praised the local firefighters and law enforcement who worked in overdrive to remedy the fallout of November’s Woolsey fire. In addition to highlighting Calabasas’ civic achievements, upcoming commercial and environmental-related developments, new cultural events, and post-Woolsey takeaways, which will include a re-assessment of cellular wire service in the area and earthquake and emergency preparedness, the program paid tribute to Shapiro’s longtime community involvement.

“This is a guy who knows personally so many people in the city,” Gaines said of his longtime civic affairs colleague, “and he is always asking how do we live their best life in Calabasas.”