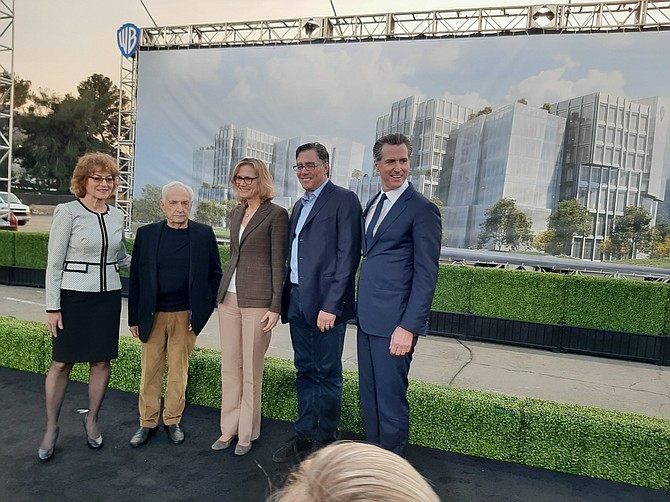 The Governor of California, the world’s most famous living architect and the new chief of Warner Bros. Studios gathered in Burbank on Tuesday for the groundbreaking of Warner Bros. office complex.

“This is a big deal,” Gov. Gavin Newsom told a crowd of nearly 300 gathered on the Burbank Studios lot. “Not just to Burbank but to the entire region.”

Newsom, along with world-renowned architect Frank Gehry and the new Warner Bros. Entertainment Chief Executive, Ann Sarnoff, all gathered to launch construction of the “Iceberg Buildings,” the nickname for the Gehry-designed Warner Bros. offices due to open in 2023.

“Warner Brothers is a legendary company,” Gehry, 90, said from the podium. “We had to give it a legendary building.”

“We are the media capital of the world,” Springer said, adding that with iconic Gehry buildings gracing such cities as Los Angeles; Barcelona, Spain, and Shanghai, thanks to the Warner Bros. project, “Burbank is a world-class city.”

Springer added that some 12,000 housing units are going to be created during the next 15 years that will provide the workers a place to live.

Warner Bros. has dubbed the new endeavor Second Century Project, in homage to the movie studio’s centennial, which it will celebrate in 2023 with the project’s completion. Occupancy of Phase I is slated for 2022 with Phase II occupancy unfurling the following year.