Meet Jennifer Yorke, director of nursing, perioperative services at the Kaiser
Permanente Panorama City Medical Center. In 2008, working as an emergency room nurse, Yorke was a young vibrant mother with a newly born son when she was diagnosed with breast cancer. This is her story of how early detection helped in her fight against breast cancer.

“My mother was diagnosed with breast cancer when she was in her 40s while I was still in high school. Because of my mother’s diagnosis at an early age, I was told to begin mammogram screenings at age 30 instead of 40,” said Yorke. This advice stayed with her while growing up, and during a routine physical just weeks before her 30th birthday, she told her doctor of the history of breast cancer in her family and asked for an early screening.

Yorke’s primary doctor requested approval to perform an early mammogram screening. “I knew something was wrong when after the screening they wanted to do a biopsy,” she said. “That’s when I was told I was positive for the most common form of breast cancer, invasive ductal carcinoma (IDC), which starts in the milk ducts and spreads to the surrounding breast tissues.”
With three different tumors in her right breast, she was diagnosed at grade three, meaning the cancer was aggressively growing.

Once diagnosed, the doctors quickly scheduled Yorke for a mastectomy, recommending chemotherapy. In a state of shock, she had a rush of emotions and was filled with questions, having previously cared for cancer patients, She began to think what would be her side effects of chemo.
“How soon will I lose my hair? How tired will I be? I thought about losing my confidence and not feeling like a woman anymore,” said Yorke.
After the mastectomy, Yorke went through a year of treatment, undergoing chemotherapy for the first six to seven months, followed by two medications targeted for her kind of breast cancer.

‘Screenings saves lives.
I encourage women to have
all the appropriate screenings
for your age. While there is a
fear of what if I have cancer, awareness and early screenings
are so important to surviving it.’

“The need for screenings and follow-up monitoring does not end after chemo,” said Yorke. Post-chemo she continued with blood tests that checked for an elevation of tumor markers every other month. “Because of the possible side effect to my heart I also received echocardiograms and I saw my gynecologist frequently. Unfortunately, four years later I felt a lump on my left breast. While the biopsy was negative, I chose to have a mastectomy on my left breast to eliminate any cancer growth. As a result, I went through multiple surgeries for breast reconstruction.”

“I received so much support. The endless prayers and blessings from family and friends is what helped me stay positive and strong. Without that and the people around me, I do not believe I could have made it through everything,” continued Yorke. She joined a cancer support group to help manage stress and when she started chemotherapy her coworkers created a volunteer schedule supporting her by going with her to infusions. “Everyone was so supportive but having my mother who went through her own breast cancer journey available, along with other family members was truly a blessing. It was that support that really helped me get through the treatment.” 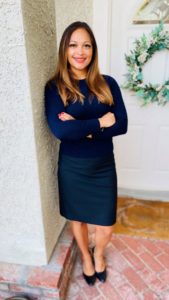 Today, now more than 10 years in remission, you can find Yorke advocating for women

diagnosed with breast cancer at an early age, serving as a mentor or volunteering to talk to family, friends, and others battling breast cancer.

“Screenings saves lives. I encourage women to have all the appropriate screenings for your age. While there is a fear of what if I have cancer, awareness and early screenings are so important to surviving it,” concluded Yorke.