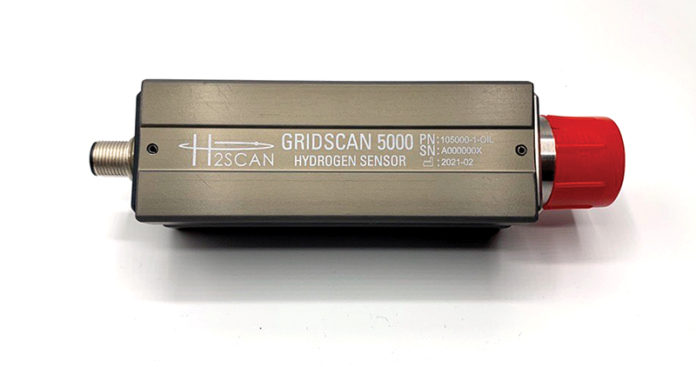 Valencia-based H2scan, a producer of hydrogen analyzers and leak detectors, is furthering its market reach with the addition of European Director Jordan Ferguson and Director of Safety, Power Storage Systems Jeff Donato.

“As the hydrogen economy unfolds, we see great opportunities opening up for our sensing technology and two of the largest are in Europe and in the battery safety market,” David Meyers, H2scan’s chief executive, said in a statement. “I look forward to working with both Jordan and Jeff to positively impact the future of hydrogen safety and reliability globally.”

H2scan makes products used in power grid transformers, nuclear power plants, fuel cells and the like. It already sells its products in more than 50 countries, but the appointment of Ferguson allows it to double down in Europe.

“We already have been part of some of what I would call alpha projects (in Europe). We’ve got a little bit of pedigree,” Alan Ross, H2scan’s director of communications said.

However, the company wants more progress in Europe – a market that has seen the use of hydrogen validated through corporate and government initiatives and has gained urgency since Russia’s invasion of Ukraine this year.

In July, the European Commission approved a series of hydrogen projects worth $5.4 billion. The initiative will be jointly funded by 15 countries from the European Union and 35 companies with operations in engineering, electricity and transportation among others.

“Russia’s unprovoked and unjustified military aggression against Ukraine has only underlined the need for Europe to diversify its energy sources and fast-forward the green transition,” Commission Vice-President Margrethe
Vestager said in a press conference.

Such initiatives have created a need for H2scan to get in the shifting energy market sooner with products such as its Gen 5 hydrogen safety and measuring sensor systems. The systems require zero maintenance, can self-calibrate and operate in harsh environments.

“(Europeans) have thrown a lot of money on the table, so a lot of these alpha projects are moving to beta projects. Our goal is to move along with them,” Ross said. “It’s not (at) scale yet. It’s not like we’re going to sell a lot of sensors, but we want to be in that beta so when that comes to market, our growth will be in line with their growth.”

“I look forward to helping H2scan expand in the European market,” Ferguson said in a statement. “The 10-plus year maintenance-free nature and proven technology of the Gen 5 sensors
meets our industrial users’ needs for quality and cost-effective operations.”

On the other side of the executive hirings is Donato’s role as director of safety, power storage systems, which will involve him heading the company’s push into the battery storage market. The role is global in nature, instead of solely focusing on North America.

Donato brings experience from his post at EnviroGuard where he worked to help provide safety solutions in the battery spill containment and environmental health and safety training sectors.

Donato also serves as a committee chair with the IEEE Power & Energy Society, affiliated with the Institute of Electrical and Electronics Engineers, which focuses on the scientific and engineering knowledge about electric power and energy. It is a role that will be useful during his time with H2scan. The society has an internal body called the IEEE Standards Association, which develops global standards in power and energy.

“As a result of (hiring) someone that understands where battery storage standards are going, which is the way battery storage will go… credibility goes through the roof,” Ross said.

“H2scan’s unique technology puts it at a significant advantage in the safe hydrogen sphere,” Donato said in a statement. “I’m eager to pursue new applications for these sensors and monitors.”

The additions of Donato and Ferguson come as a part of a larger effort by H2scan to aggressively expand its business. The company raised $70 million in February to expand manufacturing, auto-calibration capabilities and add additional sales offices. The capital was raised from UK-based long-term investment group LetterOne and South Korean energy company GS Energy.

However, the company is not expanding without challenges.

“The biggest thing is when you supply OEMs, and then you tell them you’re going to brand yourself,” Ross said. “They’re concerned that you’re going to take the attention away from them.”

Ross likened H2scan’s efforts to Intel transitioning from not branding its computer processors to later branding them — a move that led companies like Dell to openly advertise Intel technology within their products.

“We’re facing a little bit of a challenge making sure we’re doing it right,” Ross said. “We’re not Intel with billions of dollars, so we’ve got to make sure that we do it correctly in a way that doesn’t make any of our current OEMs (reluctant).”

Another obstacle for H2scan lies in China, where its technology has been partly compromised. According to Ross, a former client took the patented technology for the H2scan sensors and developed a competitive company called H2sense. The client began selling the tech without permission but missed a major software component that differentiates the H2scan sensor from others.

And a challenge remains in the engineering labor force needed to keep up with the demand the company is seeing.

“We have great demand from a lot of different applications like power industries, electrolyzers, fuel cells and battery storage,” Ross said.

Antonio Pequeño IV
Antonio “Tony” Pequeño IV is a reporter covering health care, finance and law for the San Fernando Valley Business Journal. He specializes in reporting on some of the biggest names in the Valley’s biotechnology sector. In addition to his work with the Business Journal, Tony has reported with BuzzFeed News on the unsupervised use of Clearview AI, a controversial facial recognition technology. Tony, who also conducts freelance reporting, graduated from the USC’s Master of Science in Journalism program in 2021. He is in his fifth year as a journalist as of 2021.
-Advertisement-