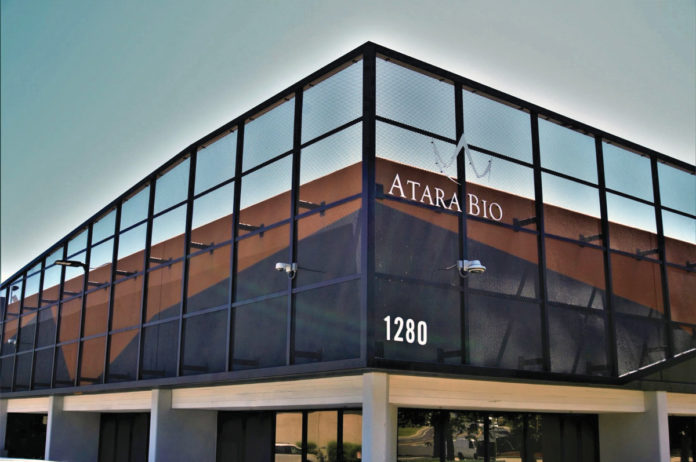 On Aug. 8, Atara Biotherapeutics reported $18.5 million in second-quarter net income this year, breaking a quarters-long trend of cash burn, which the company plans to address with significant staff reductions and a research and development-centric strategy.

The biotech company, which is headquartered in San Francisco and has a research center in Thousand Oaks, said it plans to “focus its activities as a leaner organization centered on [research and development] to further advance the company’s innovative pipeline, while reducing cash burn.”

As part of those plans, the company plans to reduce staff by approximately 20%. Atara had approximately 578 employees at the end of last year, according to calculations by research platform Macrotrends.

The company anticipates that its annual cash burn will be reduced by more than 20%, extending its cash runway into the first quarter of 2024.

Atara also said it will prioritize research and development across the next year and a half. Priorities, include the clinical development of its treatment for progressive multiple sclerosis, regulatory filings, approvals and a potential commercial partner for tab-cel, its immunotherapy treatment and filing an investigational new drug application for ATA3219, a T-cell platform.

“These actions are part of a broader ongoing strategy to focus the organization on R&D, building on the previously announced manufacturing and commercialization collaborations with FUJIFILM Diosynth Biotechnologies (FDB) and Pierre Fabre, respectively, and continuing with the R&D-focused prioritization announced today,” the company said in a statement.

Prior to this year’s second quarter, Atara’s net income had consistently posted negative numbers for about the last year, such as last quarter, when it posted a loss of $88.1 million.

The company turned the trend around this quarter when it reported a net income of $18.5 million, which was significantly impacted by the sale of its ATOM facility to FUJIFILM Diosynth Biotechnologies for $50.2 million.

“Atara’s R&D-centered strategy, clear portfolio prioritization, and purposeful partnerships are positioning us for success in reaching critical value-generating milestones for our key pipeline assets,” Pascal Touchon, Atara’s president and chief executive, said in a statement. “I would like to extend my sincere gratitude and thanks to Atara’s staff for their significant contributions and unwavering commitment to advancing truly innovative medicines for patients in need.”

Antonio Pequeño IV
Antonio “Tony” Pequeño IV is a reporter covering health care, finance and law for the San Fernando Valley Business Journal. He specializes in reporting on some of the biggest names in the Valley’s biotechnology sector. In addition to his work with the Business Journal, Tony has reported with BuzzFeed News on the unsupervised use of Clearview AI, a controversial facial recognition technology. Tony, who also conducts freelance reporting, graduated from the USC’s Master of Science in Journalism program in 2021. He is in his fifth year as a journalist as of 2021.
-Advertisement-