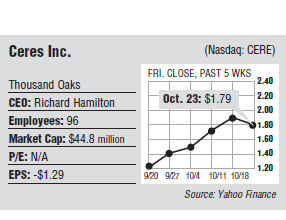 Ceres Inc. announced this month it would lay off about 20 percent of its work force, but it’s far from the only energy crop startup that is struggling. The Thousand Oaks company, which went public in a $65 million IPO in February 2012, is among several companies seeking to develop genetically modified sweet sorghum, a type of grass with high sugar content that can be converted into ethanol. A competitor is NexSteppe Inc., which was founded in Malibu in 2010 and continues to breed a sweet sorghum hybrid there, though the company has moved to South San Francisco. NexSteppe raised about $14 million in venture capital funding in December 2011 and operates offices in Brazil. Last year, it partnered with a division of Wilmington, Del. chemical company DuPont to develop advanced feed stocks. The company said it has already begun receiving commercial orders, though no details were provided. Anna Rath, NexSteppe’s founder and chief executive, admitted the market has not evolved as quickly as hoped. “It’s true that the sweet sorghum market in Brazil has not yet taken off,” she said in an email. “This is largely because promised yield numbers have not yet been achieved, which, in turn, is due to issues with management practices.” Indeed, Brazilian mills have been focused on sugarcane to supply ethanol for decades and are unfamiliar with the new crop. Rath said NexSteppe has initiated a training and certification program to improve crop management. Ceres has yet to post a profit and in its second quarter filing in July reported its loss widened by nearly $1 million to $9.3 million on revenue of just $1.4 million. In total, it has lost about $60 million since going public. The layoffs are part of a cost-cutting initiative that Ceres expects will yield cash savings of up to $5 million in fiscal 2014 and about $10 million annually thereafter. The company also said Michael Stephenson, its vice president of operations, will leave the company on Jan. 10. The developments have put the company’s stock in steady decline. Its share price has plummeted since its $13 a share IPO, closing at $1.79 on Oct. 23. Despite the struggles, Pavel Molchanov, an analyst that covers Ceres for St. Petersburg, Fla. brokerage Raymond James & Associates Inc., said it isn’t time to panic quite yet. “Ceres is not in trouble at this point, but it has been facing a difficult environment in Brazil for market adoption,” he said. “Because revenue has been ramping only slowly, it is important for Ceres to show discipline by cutting corporate costs.”