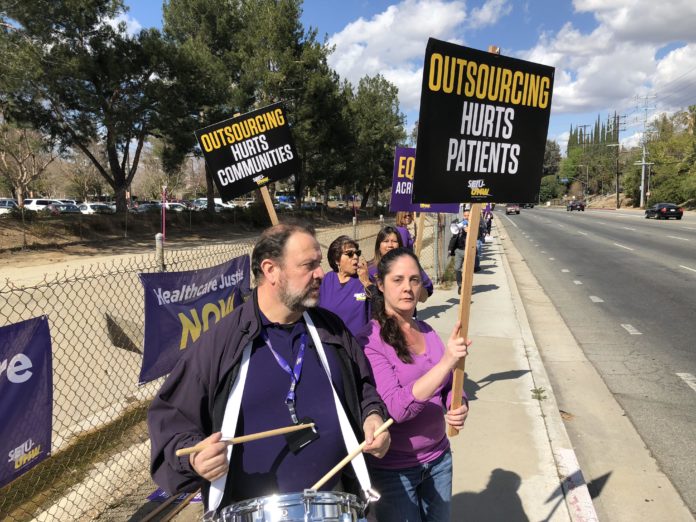 Health care workers staged a protest at Kaiser Permanente’s Woodland Hills hospital on Thursday in response to the company’s plan for layoffs at its call center there. “We’re out here today for our patients and to help our co-workers keep our jobs,” Danielle Gabison, a 15-year employee of Kaiser’s Woodland Hills call center, told the Business Journal. An estimated 250 to 300 Kaiser employees and supporters showed up to the protest throughout the day, many of them stopping by during their lunchbreaks. The picketers carried signs and noisemakers as they walked along De Soto Avenue, eliciting honks from passing cars. Most of the protesters were members of Service Employees International Union – United Healthcare Workers West, which represents more than 1,800 Kaiser employees in Woodland Hills. The union learned of the layoffs during a meeting with Kaiser in November, a union representative said. Under Kaiser’s purported proposal, the jobs at its Woodland Hills call center would be relocated to San Diego, Fontana and Riverside in the next two years, where wages would be about $2 less per hour, the union claimed. The health care system allegedly intends to outsource hundreds more jobs in the region as well, including 81 pharmacy warehouse positions in North Hollywood, a statement from the union said. The Woodland Hills protest was one of 32 scheduled across the state through mid-March to raise awareness of purported job and wage cuts at Kaiser facilities. In a statement to the Business Journal, Kaiser denied that the company had announced any layoffs, calling the allegations of job cuts “simply untrue.” “SEIU-UHW’s decision to stage picketing and make misleading and inaccurate statements about Kaiser Permanente is uncalled for and counterproductive,” Kaiser said in its statement. “If the union’s leadership is truly interested in working constructively and as a partner, as they claim, they should reconsider this path.” The contract between the hospital system and the union expires Sept. 30.