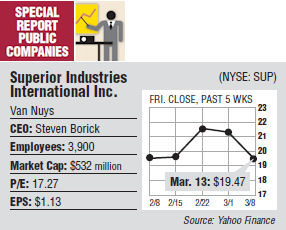 It’s been a go-and-stop last few years for Superior Industries International Inc. The aluminum wheel manufacturer rode the pickup and SUV crazes to booming sales and financial results. But when Detroit fell, Superior fell with it, forcing the company to close factories and lay off workers. And now that the car industry has left the recession in the dust, the Van Nuys company is having trouble keeping up, with its factories maxed out and workers putting in overtime. So this month, the company announced it was constructing a $135 million plant in Mexico, the fourth facility Superior has in the country. Last year, the company shipped 12.5 million wheels, the maximum it can produce. The new plant will add up to 2.5 million wheels to its capacity, said Jimmy Baker, senior analyst for equity research firm B. Riley Caris in Los Angeles. “They are shipping as many units as they can produce right now,” he said. “They need this.” Since the bottom in 2009, sales have almost doubled, bringing the company within reach of its pre-recession numbers. But Superior has paid dearly for its inability to meet the strong demand from its customers, including Ford Motor Co., Chrysler Group LLC and General Motors Co. Its plants have been producing at maximum capacity for five straight quarters, and even though Superior expects to break ground on the new plant this summer, it won’t be completed until 2015. That means lost sales for a long stretch. And just this month, the company reported disappointing fourth quarter earnings, with net income down 93 percent to $2.7 million while revenue declined 3 percent to $210 million. The company’s earnings per share of 10 cents wildly missed analysts’ estimates of 25 cents, and the stock took a big hit, dropping about 10 percent in the week following the earnings report. Chief Financial Officer Kerry Shiba largely attributed the weak quarter to issues with operating at maximum capacity in its older, U.S. production facilities. Upgrades were put off and the company paid dearly in overtime. “We’ve got to get the wheels out, but people get burned out,” he said. Alive and well Superior got itself into trouble when it had to close plants in Pittsburgh, Kan., Johnson City, Tenn. and Van Nuys after experiencing a 55 percent drop in net sales to $240 million in 2009. In addition, the company piled up a $94 million net loss that year. When the industry started to turn itself around a few years ago, instead of opening new plants, the company decided to run its existing ones at maximum capacity. Other parts suppliers followed the same cautious track, unsure of the extent of the recovery, which has turned out to be robust. In 2006, there were 15.3 million cars made in North America. That number was nearly cut in half during the recession, but last year 15.4 million cars were produced, according to George Magliano, senior principal economist at research firm IHS Inc. of Englewood, Colo. “Things are alive and well again in Detroit,” said Magliano, who forecasts vehicle sales will rise to 17.7 million by 2020. Shiba acknowledged that Superior’s 30 percent domestic market share will likely dwindle until the new Mexican plant opens. “As the industry continues to grow, it will be extremely tough to keep up,” he said. The company currently operates two plants in the Arkansas cities of Rogers and Fayetteville while its Mexican plants are in Chihuahua, Chihuahua. The location of the new Mexican plant has not been announced. Though the U.S. plants account for 40 percent of the company’s total production capability, Superior chose to open another plant in Mexico where wages are significantly cheaper, though the company will not disclose how much. “It’s the labor cost and the overall labor environment there,” said Baker at B. Riley Caris. “It’s more favorable there.” In addition, Superior plans to continue improving its older plants. Last year, the company spent $23 million on reinvestment, with $16 million spent domestically. Baker said that Superior will lose market share to competitors, such as Accuride Corp. of Evansville, Ind., until the new plant comes on line. “Through the downturn, Superior was most concerned with cutting costs,” Baker said. “Now, they’re finally re-engaging. But it’s impossible to know what the demand will be in 2016.”