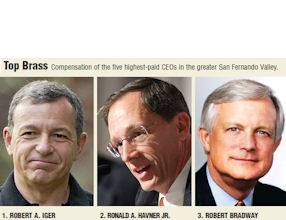 It was some year to have stock awards. Two-thirds of the chief executives on this year’s Business Journal list of highest paid CEOS took home more pay in 2012 as a shift toward stock awards as a primary method of compensation finally started paying dividends. Take Ronald Havner Jr., chief executive of Glendale’s Public Storage, second on the list. His base salary of $1 million was supplemented by $12.1 million in stock awards, increasing his total compensation to $15.3 million – a 456 percent increase from 2011. Robert Iger, chairman and chief executive of Walt Disney Co., topped the list again this year, earning a whopping $40.2 million in total compensation, 52 percent of which came from stock and options awards. The shift away from large salaries took hold during the recession as shareholders grumbled about large paychecks for executives who didn’t seem to be performing. But now, most experts think the move away from large salaries isn’t going away. “I think this is as permanent a shift as things get,” said Todd Sirras, managing partner at Los Angeles firm Semler Brossy Consulting Group. “Performance-based equity is here to stay.” Now, the performance of a company is likely to have a direct, and highly visible, tie to the chief executive’s pocketbook. Some area executives weren’t as lucky as Iger and Havner, despite the broad rebound. Mark Goldston, chief executive of Woodland Hills online publisher United Online Inc. fell again this year, slipping to number 18 on the list. Goldston saw his total compensation drop 90 percent as the company floundered in 2012. He was given no stock awards and a paltry – by executive standards – $528,650 in option awards. Goldston’s company employs the performance-based compensation model, and as the company’s earnings declined, he has been earning less. Between 2009 and 2012, profits slipped 76 percent to $12.5 million and sales fell 12 percent to $871 million. Goldston’s annual pay in turn fell from $6 million in 2010 to about $2.6 million last year. United Online once made most of its earnings on Internet provider NetZero, but that changed as competition increased. The company announced earlier this year that it was spinning off its most profitable business, floral delivery website FTD.com. In April, the company announced Goldston would have no part in either company once the spinoff was complete. Then there’s Ron Tutor, chief executive of Sylmar construction company Tutor Perini Corp., and number seven on the list. In 2012, his compensation dropped 44 percent when the company was forced to write down debt. Ed Lawler, professor of business and management organization at USC’s Marshall School of Business, said that as the economy mends, companies are unlikely to move back to a salary model – and that may have unintended consequences for boards that think it will limit compensation packages. “I think there’s something to be said for stock compensation for chief executives who founded the company, had the entrepreneurial drive and really made something of the company,” said Lawler. “But it’s something else when you realize that chief executives at some of the larger companies are reaching $30 million or $40 million this way.” Dwindling bonuses The other casualty of the stock-tied compensation model for many executives is the bonus. According to a report by New York consulting firm Towers Watson LLC, bonuses slumped in 2012. “The fact that many CEOs saw their bonuses take a significant hit and (salary) pay was relatively flat suggests the companies and their boards took a conservative approach to pay in 2012,” said Todd Lippincott, leader of executive compensation consulting at Towers Watson, in the report. In fact, 20 percent of the executives on this year’s list did not earn any direct bonus. Bonuses are coming in the form of additional stocks and options, keeping the chief executive tied to a company’s performance like never before. Similarly, option awards have declined, falling out of vogue following scandals several years ago when it was found companies were backdating stock options to maximize returns for executives. This year, the 25 best-paid executives at the area’s local public companies were awarded just $24.2 million in options awards in total, compared with $71.2 million in stock grants. And 40 percent received no options awards at all. A few execs bucked the trend. Richard Hamilton, president of Thousand Oaks firm Ceres Inc., which makes genetically modified seeds used in biofuel production, earned $2.1 million in total compensation, with no stock awards and $1.5 million in options. The package was a 64 percent increase over 2011. Similarly, Steven Borick, president of Superior Industries International Inc., was given no stock awards, but $653,455 in options out of a total compensation package that exceeded $2.6 million. And while most boards of directors seem to see the shift toward performance-based compensation packages as a way to rein in excess spending and drive executives to work harder for shareholder return, it isn’t necessarily a perfect model. “It has its challenges,” said Sirras, the compensation analyst. “There’s no silver bullet that’s going to make sure a company stays afloat. If I give you some money, it doesn’t mean you can control all the factors. But it can make you try.” Download the 2013 VALLEY’S EXECUTIVE COMPENSATION list (pdf)