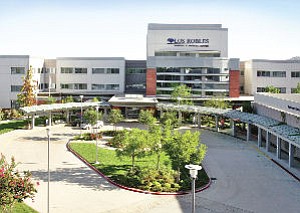 Facility: Officials also plan to eventually build a fourth floor onto another wing.

The state of California has given hospitals with the highest risk of having their buildings collapse during a major earthquake until 2013 to seismically retrofit their buildings.

But hospitals like Los Robles Hospital & Medical Center in Thousand Oaks have taken a less expensive route by starting construction from scratch rather than forking out millions of dollars to invest in an old building...