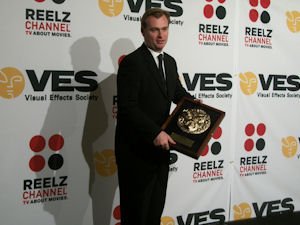 That was no dream Christopher Nolan was having at the Visual Effects Society Awards.

The director of "The Dark Knight," "Memento," and "The Prestige" was honored by his entertainment industry peers with the society's inaugural Visionary Award while his summer what’s-reality, what-isn’t head-scratcher "Inception" swept the four categories in which it was nominated...