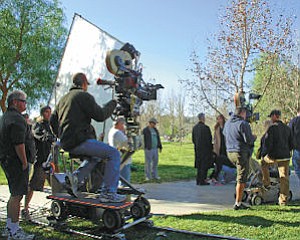 Activity: Santa Clarita recognized for its film friendly stance of its employees.

The Visual Effects Society took another step in its campaign to improve working conditions of its membership while assuring profitability for visual effects facilities and the Hollywood studios.

The Encino-based group recently released an industry Bill of Rights as a starting point to discussions between the artists, facilities and studios to strengthen the visual effects industry...