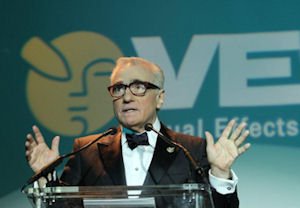 Animated feature film “Rango” swept all the categories in which it was nominated including outstanding visual effects in an animated film at the 10th annual Visual Effects Awards on Feb. 7 in Beverly Hills.

The Johnny Depp-voiced lizard movie won four awards—the most of any at the awards show held before a crowd of about 1,000 visual effects artists, entertainment industry professionals, and guests at the Beverly Hilton Hotel. “Rise of the Planet of the Apes” and “Transformers: Dark of the Moon” tied for live action films with two awards each.

The stories he tells achieved their success in film versions because of the talents of visual effects artists, said the 89-year-old Lee.

“You make it look so fantastic, so exciting and best of all so real,” Lee said. “The audience thinks it’s really happening.”

Lee’s name had been suggested for the Lifetime Achievement Award by Marty Shindler, a VES member and entertainment industry consultant based in Encino.

“Stan Lee was honored for many reasons, not the least of which is the fact that his stories and characters have been instrumental in creating as many, if not more jobs in the entertainment industry broadly and the animation and visual effects industry more specifically than almost anyone else,” Shindler said.

Unlike previous years with “Avatar” and “Inception,” no one live-action film dominated the night. “Harry Potter and the Deathly Hallows – Part 2” had been nominated for five awards but came up empty at night’s end, as did “The Adventures of Tin Tin,” which had been nominated in six animation categories.

The society has more than 1,800 members around the world. In recent years, it has begun to shift from its role as a trade group to taking a more active role in improving working conditions and benefits for its membership.

“Artists are forced to work crazy over-time hours,” said Eric Roth, the group’s executive director. “That is not the best way to do business under any model.”

Trumbull revisited that theme in his remarks. As visual effects supervisor on “Close Encounters of the Third Kind,” he said he was fortunate to have been able to receive a cut of the profits, which still provides him with residual checks.

“I look forward to when all of you receive residual checks for all the work you do to make the movie business work,” Trumbull told the audience.

The Melies award given to Trumbull, whose credits include “2001: A Space Odyssey” and “Blade Runner,” recognizes lasting contributions, artistry and groundbreaking work in visual effects.

Melies, a turn of the century French filmmaker, figures prominently in “Hugo,” which won two VES awards and whose director, Martin Scorsese, made a surprise appearance at the start of the awards program.

Melies made about 500 films about which half have survived, Scorsese said.

While “Hugo” was made in high definition and was the director’s first use of 3D in a film, Scorsese gave a plug for the good track record of 35mm film.

“It really is the best format for the preservation of cinema,” Scorsese said.