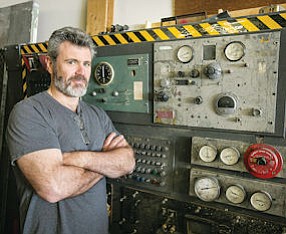 As Alec Gillis maneuvers around the dismantled sets of his low-budget indie film “Harbinger Down,” he has only one request – no photos of the monsters.

Principal photography wrapped on the horror film this month but it has yet to be released, and scattered about a Chatsworth warehouse were various forms the space creature takes as it devours its way through the crew and visiting scientists aboard a crab trawler...