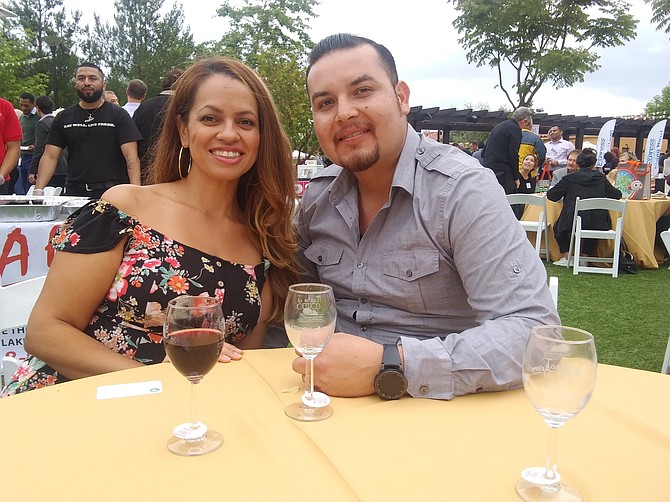 “This year’s MIXPO was the largest ever with vendor booths selling out several weeks before the event,” Chamber President Jill Lederer told the Business Journal a day after the event. “MIXPO is the largest networking mixer of the year with mini Taste of Conejo and business expo elements blended in.”

That was the scene midweek as several hundred people turned out to learn about Conejo Valley’s business community while enjoying restaurant fare and wines from such local vintners as Sunland Vintage Winery in Thousand Oaks, which was repped at the event by Sales and Marketing Director Debby Giovinazzo.

All hands were on deck at 101 North Eatery & Bar, a Westlake Village restaurant which opened last May, as staffers served falafel bites, fresh and fruity Aperol libations and hazelnut trifle desserts.

101 North Marketing Manager Brittany Helfer told the Business Journal that she felt the event was important to the eatery’s future.

“Being a part of events such as the MIXPO is simply what our brand is about; connecting with the community,” Helfer said. “We try to take any and all opportunities we get to showcase our food and cocktails to people in the surrounding areas. We pride ourselves on being a community restaurant, which is why we enjoy participating in local community events.”

With an original location in Sherman Oaks that’s been around since the mid-1940s and another location in Westlake Village, Barone’s Pizza appeared with samples of its product and several varieties of toppings. The Barone’s team said that a third Barone’s in the region is three weeks away from opening in Thousand Oaks nearby the Tilted Kilt Pub and Eatery on the 13000 block of Thousand Oaks Boulevard.

Moorpark was well-represented by such businesses as Smokin' Steve's, a pit barbecue catering company, an eponymous the Steve Bayles started after he was fired from his insurance job. He took some classes and combined the contractual work he did at his last job plus his experience in route billing from his previous work running an Arrowhead water route and applied it toward Smokin’ Steve’s, which operated out of Simi Valley from 2009 to 2014 and has been based in Moorpark ever since.

“I started the business because there was no good barbecue around,” Bayles said as he served MIXPO patrons tri-tip sliders and hot link sausage samples.

There was more than just food vendors at the event, and John D. Smith, an account executive at Spectrum Reach in Camarillo, said MIXPO represented his company’s core demographic for his media outlet’s localized programming.

“It’s all about creating hyper local content,” Smith said, adding that the 10 reporters in his Ventura County quadrant recently reported on everything from this weekend’s Strawberry Festival in Oxnard to a kombucha producer in Ventura.

Yuki Izoe, marketing director for Thousand Oaks-based Shonan Beauty Clinic, made it a point to represent her company, as did Daniel Rodriguez, partner of Thousand Oaks-based D&C Network Solutions, a computer IT company specializing in cyber security, and wife Maria, owner of a daycare center. The Moorpark couple were among the attendees taking in the business festival and enjoying the food.

“This is a good way to meet people and really network and see what Ventura County has to offer,” said Rodriguez, who co-founded his business with Daniel Garcia, also of Moorpark. “Not just for myself but seeing what’s come into the Moorpark community.”

The chamber’s Lederer seemed pleased with the way her event unfolded. “We’d specifically relocated to the beautiful outdoor celebration space at Los Robles Greens this year to accommodate the growth and we’re so happy that vendors, sponsors and guests all had a fabulous time,” Lederer said.

Despite gloomy gray skies and dark clouds brewing overhead, the outdoor event managed to take place without a single drop of rain.

“We really appreciate the weather cooperating, as well!” she said.