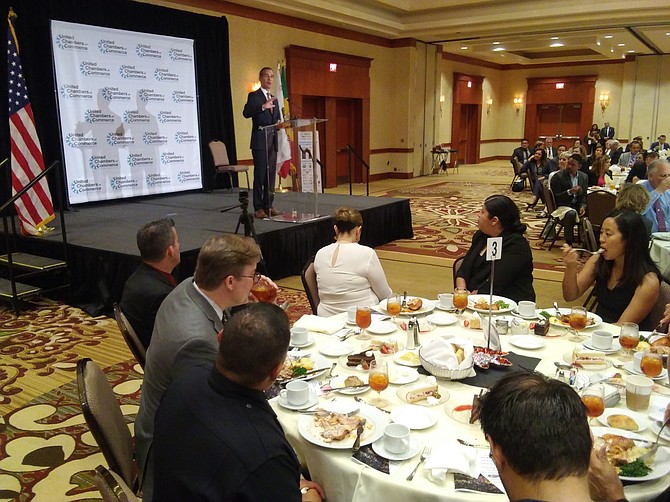 United Chambers’ chair, Armida Colmenares-Stafford, introduced the 4th-generation Angeleno, born and raised in the San Fernando Valley. The son of one-time Los Angeles District Attorney Gil Garcetti stepped to the dais and praised the roomful of people representing the Los Angeles Police Department, including Chief of Police Michel Moore; the Los Angeles Fire Department; city agencies and departments and members of the 18 chambers, with whom he has enjoyed collaborating since his 2013 election, he said.

Garcetti deemed the luncheon “a moment to pause and punctuate.” He said that “the San Fernando Valley, where I am from, is the beating heart of this great city.”

Garcetti, who has 3.5 years left in his term, nodded to both his past achievements and the future in a speech that heartened many in attendance. He spoke about how, since he took office, 14,000 miles of city streets have been paved and some 70,000 potholes filled.

“You can now get permits from Building & Safety online,” he said.

Continuing on the topic of business, Garcetti used, by example of robust happenings unfolding in the Valley, August’s grand opening of the first phase of 24 in Chatsworth, the mixed-use campus created by MGA Entertainment chief Isaac Larian in collaboration with his son and son-in-law, Uncommon Developers’ founders Jason Larian and Ryan Hekmat, respectively. Garcetti recounted Isaac Larian’s trajectory — from his 1970s flight from Iran to America with only $700 in his pocket, to his formation of MGA, the largest privately held toy company in the world — as simultaneously a great American and great Valley success story. Garcetti said that Los Angeles is full of such stories, and that the immigrant drive is what makes both California and America strong and unrivaled.

Inevitably, the lecture came around to the issue of homelessness. With some 65,000 homeless in Los Angeles County, Garcetti called the crisis “a man-made disaster” and half-joked that the mayor of Palmdale, with whom he is in contact every week, said that he doesn’t want L.A.’s homeless going to his city. Touting an increase of bridge home shelters in L.A. from 5 to 7 under his watch, Garcetti said with confidence, “This is a problem we can solve.”

Opening speaker Gloria Pollack shared an anecdote about a stranger helping her when she had car trouble, metaphorically describing the work that United Chambers of Commerce does for the business community.

Mayor Garcetti wrapped up the event leaving the audience feeling good about the achievements of North Los Angeles and, by extension, Greater Los Angeles as it heads toward attracting people from all over the world with major sporting events, such as the 2026 World Cup and the 2028 Olympics.

“We will succeed…and build a strong economy,” he said.