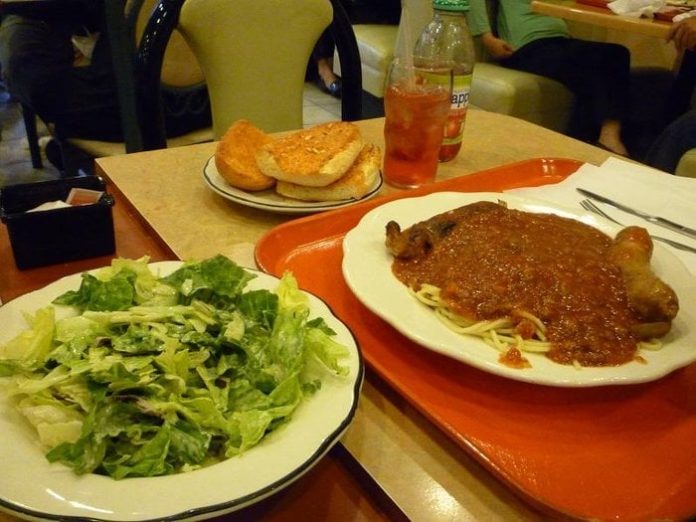 A pending development in Los Angeles’ Fairfax District has prompted Andre’s Italian Restaurant, a renowned casual dining spot at Town & Country Shopping Center at Fairfax Avenue and Third Street, to open a second restaurant in the Valley. Debuting this fall, the sibling restaurant will be called Grandi Italiani. Andre’s Italian Restaurant is well known among L.A.’s longtime foodies for its made-on-site lasagna and ravioli pasta, spaghetti imported from Italy, garlic bread and house salad dressing, which the eatery also sells by the bottle. A fixture at Fairfax since its 1963 opening, the cafeteria-style venue in more recent years expanded by taking over an adjacent restaurant space and adding a gelato station. The news of the Valley location comes mere weeks after Urbanize.LA reported in May that architecture firm MVE + Partners unveiled plans for a proposed mixed-use development at Town & Country — located across Third Street from the Farmer’s Market and Caruso’s The Grove town center — where Andre’s is flanked by a K-Mart and a Whole Foods. The MVE project calls for the construction of a 251-foot-tall, 19-story glass-and-steel high-rise with 381 residential units and 66,000 square feet of ground-floor restaurants and retail. The proposed tower would replace the portion of the Town & Country currently occupied by K-Mart while Whole Foods and CVS Pharmacy will undergo an overhaul. On July 18, Andre’s owners, via Facebook, updated customers on the restaurant’s status. With Andre’s lease at the shopping center set to expire in December, the owners are seeking a month-to-month lease past the date to keep the restaurant going until the site’s landlord receives approval from the city to break ground on the redevelopment. At the time, the owners expressed reservations and uncertainty over whether Andre’s can continue at this location once the development has been completed. “An Andre’s at the new shopping center might be possible, but the new lease terms would make for a costly proposition: higher rent, taxes, insurance, common area maintenance, etc.,” the post read. In the July post, Andre’s also announced it had secured a new location in Canoga Park. “It’s much less costly to lease a space in Canoga Park than it is in the Beverly-Grove area. Additionally, we would be able to keep our prices more affordable for our customers,” the post said. However, in an Aug. 21 email, the restaurant’s owner partner and manager, Aron Celnik, said that Andre’s Italian has no plan to leave its long-time location, but that even in the best-case scenario, it will have to shutter temporarily. “Andre’s is not moving; we’re opening a new location,” Celnik told the Business Journal. “We’ll be more than happy to stay at Third & Fairfax if the shopping center will have us and the costs are reasonable. “The reality is,” he continued, “even if we do sign on as a tenant in the new development, Andre’s would be closed for at least a year to allow for the new construction. This is the main reason why we’re adding a new location.” Plans for the Canoga Park restaurant — which has the Metro Orange Line a six-minute walk away — have been submitted with the city. The owners added via Facebook that the new name “was carefully chosen to be easily remembered and to honor the many great Italians that helped to enrich our lives with their culture, scientific achievements, food and strong family values.”