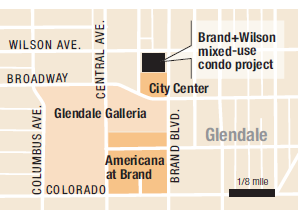 A large vacant lot that has been an eyesore in the heart of downtown Glendale for two decades is finally being developed into a large mixed-used apartment project. Holland Partner Group is building 238 units and 10,000 square feet of retail on Brand Boulevard at Wilson Avenue, property once planned for an office tower. The Vancouver, Wash. developer completed its $15.8 million purchase of the 1.4-acre lot last month after it received final approval for its Brand+Wilson project from the City Council. It plans to break ground on the $40 million, six-story project early next year, once building permits have been secured. It is expected to be completed in 2014. “We’re really excited about what’s going on in downtown Glendale,” said Tom Warren, the company’s chief operating officer. “We really think this area is one of the unique, truly walkable areas in Los Angeles.” The lot has been vacant since a string of low-slung shops were torn down on the site to make way for a high rise during the office boom of the 1980s. However, when the market crashed during the early 1990s those plans never materialized. Since then, the lot at 111 N. Brand Blvd. has been eyed for an office tower, as well as a luxury hotel, but nothing materialized and it has only served as an occasional pumpkin patch or movie location. Phil Lanzafame, executive officer of economic development for Glendale, said the current development is the type of project the city wants to encourage at this time. “This was strategic planning and really looking at what we wanted downtown to look like, and then working with developers to make it happen,” he said. Final evolution Few in the city would have imagined the lot would have sat vacant for so long. Originally, it was supposed to be the site of a sister building to City Center, a 19-story office tower that features shops and restaurants on its bottom two floors, including California Pizza Kitchen and BJ’s Restaurant & Brewhouse. However, after the first high rise was complete, there was little demand for additional office space and the city installed a garden on part of the lot as years passed. In 2008, the Amidi Real Estate Group proposed completing the planned City Center II tower, but once it received approval, the office market crashed again. Even now, the office market is a question. The city still has an office vacancy rate of 22.3 percent in the third quarter, according to brokerage Jones Lang LaSalle Inc. However, even as the city’s office market has remained challenged, downtown Glendale has emerged as a desirable location for retail and multifamily living. Developer Rick Caruso’s Americana at Brand opened in 2008, the most prominent mixed-use center in the city. It includes 75 stores, 100 condominiums and 238 apartments, all of which are virtually occupied. Additionally, the Glendale Galleria has more than $30 million of upgrades in the works or already under development. The Brand+Wilson property will model itself after the Americana mixed-use project, though with much less retail, while the ground level has been designed to complement the existing plaza of the adjacent City Center. The remaining five floors will feature residential units ranging from more than 600 square feet to more than 1,000 square feet. They are being built to condominium standards so they could be sold at a later date if desired. Rental rates have yet to be determined. “We’re really looking at younger, active folks who enjoy being able to walk around the neighborhood,” Warren said. Glendale’s rental market is thriving. More than 50 percent of the city’s residents live in rental units and there is demand for more. That is consistent with a nationwide trend that has perked up demand for multifamily housing in urban cores, such as in downtown Los Angeles. “This is a great development for this market. Most of these units are being built to condominium standards, and that’s smart. If the market turns, they can be sold as condominiums,” said Greg Astorian, senior vice president of commercial properties at RE/MAX Tri-City. Moving In Still, the project has not entirely been welcomed. After the demise of the last planned office tower in 2006, the city’s Downtown Specific Plan earmarked the space for a high-rise hotel, something seen as crucial for attracting business. That desire for a hotel led to the mixed-use project only winning a 3-2 vote for approval at an initial May vote of the City Council. Although the margin improved to 4-1 by the final vote, Councilman Dave Weaver still opposed it, saying the lot should become a hotel. Astorian agreed that a hotel is still needed: “The city of Glendale needs a four- or five-star hotel, there is no question about it. But this is still a great development for right now.” Lanzafame said plans for the site changed as the market changed. “There was a hotel proposed at one point, but the developer decided not to go through with it,” he said. Excavation for the mixed-use project’s underground parking could begin in as little as a few weeks as the city moves quickly to issue the permits, Lanzafame said. Warren said the pace of the development has picked up since the Holland Partner Group first gave its project proposal to the city in May. “I think was a little harder to get through the approvals process before. Now they have a vision,” he said. In fact, the company has already submitted plans for a second, similar project just blocks away at the corner of Orange Street and Wilson Avenue to be called Orange+Wilson. Holland Partner is under contract to buy the property, but will wait until it has received all entitlements. “We really do feel there will be a strong residential market in Glendale,” said Warren. “And what really inspires me about these urban areas we’re seeing develop is the changing energy in these areas. We’ve been getting great feedback and a high level of interest.”