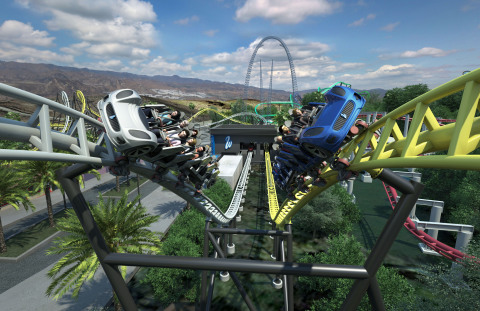 Six Flags Magic Mountain plans to open a new attraction called West Coast Racers next year. The Valencia theme park calls it “the world’s first racing launch coaster.” It will feature two side-by-side tracks with four individual high-speed launches. The roller coaster race will cover two complete laps with high-banked turns and over/under near misses. A highlight of the ride is a “pit stop” designed and produced by the speed shop West Coast Customs in Burbank. “Six Flags leads the industry in thrill ride innovation; it is part of our DNA, and we are taking thrills to the next level with the new West Coast Racers,” Park President Neal Thurman said in a statement. “Six Flags Magic Mountain is the undisputed ‘Thrill Capital of the World’ and with this newest coaster, strengthens our position as the ‘Coaster Capital of the World’ with a total of 20 roller coasters — more than any other theme park on the planet.” West Coast Racers will be located in a new “urban-themed” area of the park where the wooden coaster Apocalypse currently exits. As part of the construction, the Cyclone 500 Go Karts will be redeveloped and new retail outlets and restaurants will be added to the park. The theme park is owned by Six Flags Entertainment Corp. in Grand Prairie, Texas.