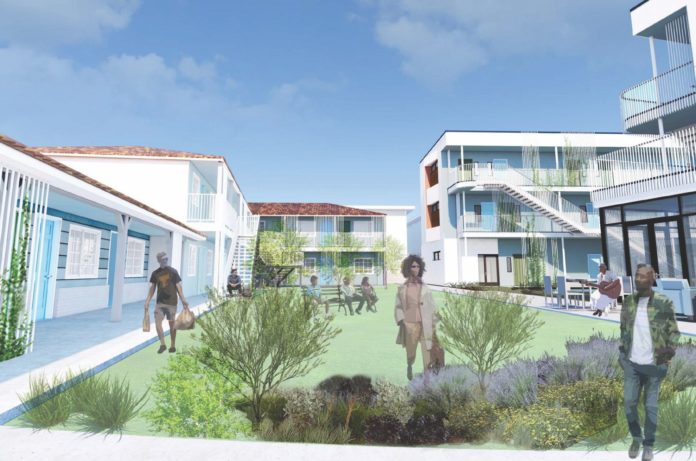 LA Family Housing has long been a prolific builder of supportive housing in the San Fernando Valley, and now the Sun Valley-based nonprofit has plans for a project in Panorama City that will replace an aging motel.

The new apartments will be built at the site of the Panorama Motel at 8209 N. Sepulveda Blvd. The nonprofit builder is seeking approvals for the project, which will retain most of the existing one- and two-story buildings to be transformed into 41 units of permanent supportive housing.

One of the structures, which includes 10 motel rooms, will be replaced with a three-story building containing 50 residential units, plus space for on-site supportive services.

The resulting development will total 91 apartments, including 90 units earmarked for low-income households and one market-rate manager’s unit. There will also be parking for six vehicles.

Los Angeles-based office42 is designing the site, which will have an array of services for residents including case management, transportation assistance and life- skills training. There will also be mental and physical health care providers and substance abuse treatment.

LA Family Housing has had a busy development docket. The builder has also been developing The Angel Apartments, a proposed veterans supportive-housing complex. The project, which is slated to rise at 8547-8549 N. Sepulveda Blvd. in North Hills, will see the construction of a four-story complex with 54 low-priced residential units with on-site supportive services and a 20-car garage.

Gonzalez Goodale Architects is designing the Angel. Its amenities will include a pair of courtyards, a community garden, a rooftop deck and other open-space features.

The total estimated budget for The Angel is $28.2 million. The project has obtained approximately $6.7 million in funding through Measure HHH and a grant from Kaiser Permanente.

Measure HHH, which passed in 2016, enabled city officials to issue $1.2 billion in bonds for the deployment of permanent supportive-housing units for the homeless. It requires at least 80% of its funds to be used for supportive housing and facilities, and up to 20% can be used to develop affordable housing.

The North Hills endeavor is not the only project underway at LA Family Housing in the San Fernando Valley. Other projects include proposed buildings in Sylmar and Panorama City.

Budgeted at just under $28 million, the Sylmar II — which will be built at a vacant lot at 12663 N. San Fernando Road — has received funding from a combination of sources. The Board of Supervisors approved $5.9 million in funds for Sylmar II. The city of Los Angeles has also approved $21 million in multifamily housing revenue bonds for the complex, a joint venture between LA Family Housing and Meta Housing Corp. that will total 56 units.

In Panorama City, LA Family Housing is planning the Talisa Apartments at 9502 Van Nuys Blvd. The Talisa Apartments — which would replace an auto repair shop and single-family dwelling at the northeast corner of Van Nuys Boulevard and Plummer Street — will see the construction of a four-story building featuring 49 apartments priced for low-income households. The proposed development will include one- and two-bedroom units, a three-bedroom manager’s apartment, and 30 parking stalls in a ground-floor parking garage. FSY Architects is designing the project, which would include a central landscaped courtyard and ground-floor space for a community room and social services offices.

In addition to these sites, LA Family Housing has complexes under construction in South Los Angeles and Lake View Terrace.

According to plans filed with Los Angeles City Planning, Memon intends to demolish a one-story commercial building to build a six-story apartment building at 8743-8747 N. Parthenia Place, near the major thoroughfare of Sepulveda Boulevard.

The project’s consultant is GA Engineering of Van Nuys.