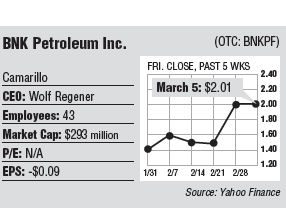 Two years after entering the European natural gas market, BNK Petroleum Inc. has successfully drilled the longest horizontal shale gas well in Poland. The small Camarillo oil and gas exploration company, which announced the milestone late last month, will begin fracture stimulating, or fracking, to see the full extent of available gas. “We think a very large portion of this could be productive,” said Wolf Regener, chief executive of BNK. “Our initial analysis was very promising. We have a major upside here in Poland.” BNK’s success in Poland comes less than a year after it sold off assets in southeastern Oklahoma to a unit of Exxon Mobil Corp. for $148 million. Exxon, too, was working on gas production in Poland, but pulled out in 2012 because the Irving, Texas company didn’t see sufficient results in two exploratory wells. BNK was spun-off about five years ago from Bankers Petroleum Ltd. of Calgary, Alberta. Since the spin-off, BNK has focused on the European shale gas market, buying up nearly 5 million acres of drilling rights in Poland, Germany and Spain. The market is seen as hugely promising because there is little new gas production in Europe, which is largely served by Gazprom, a Moscow company controlled by the Russian government. Retail prices for natural gas in Europe are three to four times higher than in the U.S. What’s more, Poland has some of the largest reserves of shale gas in Europe, according to the U.S. Geological Survey. And while fracking – a process that consists of injecting water, sand and small amounts of chemicals at high pressure into rock formations to dislodge oil or natural gas –is hugely controversial in the U.S. and much of Western Europe, regulations are less stringent in Eastern European. Frederick Lawrence, vice president of economics and international affairs at the Independent Petroleum Association of America, a Washington, D.C. trade group, said the potential in Poland is well documented, yet no one has made much headway. “There is no question whether the reserves are there. Someone will ultimately crack the code in Poland,” he said. “A year from now, we’re going to have much more information on that play. It still hasn’t had that critical mass to match its potential.” U.S. investors in the U.S. already are excited. Shares of BNK have shot up since the announcement, closing up more than 25 percent, to $2.01 on March 5 in over-the-counter trading. Regener said BNK is still involved in oil production in Oklahoma, but its clear long-term growth is in Europe. If the fracking in Poland proves successful, Regener said the company would begin looking for outside money to fund expansion. “For a company our size, you try to use a partner’s money for developing large projects and more sites,” he said. “The biggest value creator is expansion in Europe. Assuming it works, it can really drive us.”