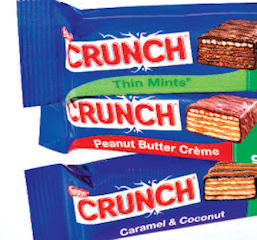 Girl Scout Cookie Season may be over, but Glendale-based Nestlé USA gave the cookie fans a new treat with the launch of its new line of Nestlé Crunch Girl Scout Candy Bars. The three-candy collection, which hit retail shelves on June 1, is based on the popular cookies — Thin Mints, Caramel and Coconut and Peanut Butter Crème. The line will be sold in retailers until September. This marks Girl Scouts of America’s first candy bar partnership, although it does not mark its first partnership with Nestlé. Girl Scouts previously partnered with Nestlé’s Edy’s ice cream brand to create Girl Scout Cookie-inspired ice cream flavors. Since promotional images of the candy collection began swirling around the Internet a few months ago, online blogs and publications have been abuzz about its release. A pre-sale promotional online program on Facebook led to a sell-out of the product in less than 24 hours. One dedicated fan bid $650 for the first-edition set of three candy bars from the first production runs at an auction held at Galerie Michael in Beverly Hills. “We’ve seen no limit to the excitement for these irresistible treats that bring together the best of Nestlé crunch and Girl Scout Cookies,” said spokesperson Patricia Bowles of Nestlé USA Confections & Snacks in a prepared statement. Consumers have used Nestlé Crunch’s Facebook page to sound off on the new collection. Robert Noll posted, “Thin Mint Crunch bars – a marriage made in heaven!”