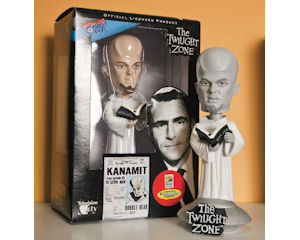 When television producer Jason Lenzi decided to start a business as a way to keep busy between work assignments, he combined two of his favorite things — television and toys. Lenzi partnered with Jason Labowitz, president of Entertainment Earth Inc., in 2005 to form BifBangPow!, a toy development company that targets title properties from entertainment studios to produce everything from bobblehead dolls and action figures to license plate frames. It’s a small shop: Lenzi lands the deals and creates design concepts with help from a part-time designer, and Entertainment Earth handles the product distribution. But BifBangPow!’s roster of licensed properties includes cult classics such as the Twilight Zone and Six Million Dollar Man and current hits such as Dexter and Dr. Who. Lenzi said his strategy is to cater to the “esoteric titles”— personal favorites that are often neglected by other manufacturers. And he says his creative process relies more on personal experience and memories, than professional design skills. “I’m making the toys I wanted when I was 10 years old,” Lenzi said. Consumer interest for current TV titles can be unpredictable, causing a product’s popularity to be short-lived — and that’s a constant challenge, Lenzi said. But he’s got a gem in the mix: the collection for Showtime’s hit show Dexter. “Our Dexter action figure has been an evergreen and we just keep making them,” Lenzi said. “(The show) has a weirdness that people dig. It’s a great seller.”