The Regulatory Wipe Out 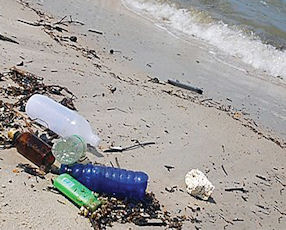 Who likes clean water, sparkling beaches and boatloads of tourists forking over cash for smoothies, oh-so-L.A. apparel and a night out at the local hip brew pub? Everyone. Who wants to pay for it? No one. That about sums up the state of politics over efforts to clean up the region’s waterways, especially what’s left of our once free-flowing rivers and, of course, our world-famous beaches. Think I’m overstating the problem? I suggest you visit any one of our county beaches after a rain storm, where trash litters the sand despite a decade of efforts to keep trash out of storm drains. And that’s only part of the problem. Take a swim in any number of county beaches during the summer, when there hasn’t been a storm cloud in sight for months. My recent preference has been Santa Monica, but I have to admit the brownish foam after a big wave can cause me more turmoil than the hot dog I just scarfed down. Here’s what’s even more stomach-churning: the regulatory diagnosis for all these problems. The fact is that many local waterways violate the federal Clean Water Act, which means the county is under pressure to do something about it. So, it’s worth noting the county Board of Supervisors this month once again took up the issue of a proposed storm-water parcel tax, which would have generated nearly $300 million annually to improve the storm water system. The proposed tax would have cost homeowners about $54 annually but some retailers could have seen $11,000 bills. Real money. The proposed fee was poorly thought out, as was the arcane process for protesting it – prompting the supervisors to rethink it all. In January, the proposed tax was halted, and this month supervisors told county bureaucrats to work with the Los Angeles Area Regional Water Quality Control Board to come up with a better financing mechanism. But the problem isn’t going away no matter how much residents and businesses don’t want to pay extra taxes. In fact, some kind of new storm-water tax measure could appear on the ballot as early as next year. Yes, the economic benefit of clean beaches may mostly go to coastal cities and businesses, but even here in the Valley, we benefit from the hordes of tourists drawn at least partially by L.A.’s fun-in-the-sun international reputation. They take trips to Universal Studios, eat at our restaurants and visit other attractions. There’s a lot at stake, and it would benefit business groups to insert their voice in the matter now, not simply wait for the next bureaucrat-generated plan to wash up on shore – and then howl. • • • I don’t normally like to use this space to tout what is in the current edition of the Business Journal. But this is the paper’s annual largest and most profitable public companies issue, and there is a lot of content. Like last year, media giant Walt Disney Co. tops our list of largest public companies, and for good reason. The company, despite its size, is a limber and ferocious competitor in the media and entertainment industry that isn’t afraid to make big moves, which more often than not pay off. Four years ago, it spent $4 billion to acquire the rights to Marvel Comics and already has produced huge money makers off its X-Men, Spider-Man and Iron Man characters. Most recently, its “Avengers” film raked in $1.5 billion in the worldwide box office. But now with its purchase of the “Star Wars” franchise from Lucasfilm – a franchise it plans to expand into new galaxies – it’s frightening to say, but the company will likely get larger than ever. But please don’t stop there, the issue also includes several features on companies a fraction of the size of Disney, such as Netsol Technologies Inc. It’s a Calabasas company run by three brothers from Pakistan that – believe it or not – started out as a holding company for a Santa Monica clothing shop. Today, it’s a leading provider of software that tracks car leasing for auto makers and dealers. That’s just one of the interesting tales. • • • Finally, in this issue we debut a new feature: a monthly listing of home sales and listings. One set of data is broken out for houses and another set by condos. The data is aggregated for Los Angeles County neighborhoods within the paper’s coverage area – the San Fernando, Santa Clarita and Antelope valleys – while another set comprises all of Ventura County. Readers can search by community and ZIP code to find the number of units listed and sold; the median price; the change in listings, sales and prices – both year-over-year and month-to-month. There is also a particularly fascinating data point that shows the ratio of the sales prices to the listing price. Dig in and let us know what you think. Laurence Darmiento is editor of the Business Journal. He can be reached at editor@sfvbj.com