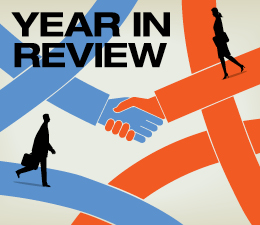 The biggest deal of the year took place only partly in the San Fernando Valley.

That was the Discovery Inc. – Warner Media LLC transaction that closed in April at a value of $82.6 billion.

Discovery, based in New York City and now known as Warner Bros. Discovery Inc., bought the media assets of AT&T Inc. in a merger, which includes Warner Bros. Entertainment in Burbank and HBO Max in Culver City.

The new standalone media and entertainment company began trading on April 11 under the ticker symbol WBD.

David Zaslav, Warner Bros. Discovery chief executive, said that with its collection of assets and diversified business model, the company offers the most differentiated and complete portfolio of content across film, television and streaming.

“We are confident that we can bring more choice to consumers around the globe while fostering creativity and creating value for shareholders,” Zaslav said in a statement in April. “I can’t wait for both teams to come together to make Warner Bros. Discovery the best place for impactful storytelling.”

The Warner Media-Discovery deal stood out in the S&P Global Market Intelligence’s Q2 M&A and Equity Offerings Market report as having the largest completion value since 2019.

Still, the S&P Global second-quarter report concluded that dealmaking conditions were far more challenging in the first half of the year than they were last year.

“While a few big-ticket transactions helped boost volumes during the first half of 2022, the last six months of the year are looking less favorable,” the report said.

S&P Global is the company that provides data for the Business Journal’s monthly M&A page.

Meanwhile, the days of counting on special purpose acquisition companies, or SPACS, to provide a meaningful lift to merger and acquisition activity could be nearing an end, the report continued.

“While plenty of blank-check companies are still looking to deploy their capital, the number of SPACs executing slowed to a trickle in the second quarter, and activity is showing no signs of picking up in the second half,” the report said. “The entire IPO market has been quiet, which is unlikely to change in the near term.”

That was particularly true in the Valley region.

There was only one IPO in the greater Valley area this year — Westlake Village and Switzerland-based Energy Vault Holdings began trading on the New York Stock Exchange in February following a merger with SPAC Novus Capital Corp. II.

Another big deal that closed over the summer was Link Logistics Real Estate, an affiliate of Blackstone Real Estate, itself a division of Blackstone Inc., a New York-based investment firm, taking over the 27 million square feet of properties owned by PS Business Parks Inc. in Glendale in a transaction valued at $7.6 billion.

Stephen Wilson, the chief executive of PS Business Parks, said that he was proud of everything accomplished at the company.

“This transaction is an exceptional outcome for our stockholders and a testament to the incredible company and portfolio of high-quality assets our team has built, acquired and enhanced over the years,” Wilson said in a statement at the time the deal closed in July.

“This transaction allows us to expand our presence in top-tier markets, while supporting our customers’ lifecycles, offering them the space they need as their businesses mature,” Huffman said in a statement.

Another big deal was announced in February and closed in late August.

In that one, Second Sight Medical Products Inc., with operations in Sylmar, merged with Nano Precision Medical Inc. in Emeryville, in an all-stock deal valued at $183 million. The combined company later changed its name to Vivani Medical Inc. and trades under the symbol VANI on the Nasdaq Capital Market.

The completion of the merger marks a milestone for Vivani as it continues to grow the company with a strong team, sufficient funding and an attractive group of investors, Mendelsohn said.

“(All) support our pursuit to develop and commercialize a new portfolio of miniaturized drug implants which can effectively address medication non-adherence, a major challenge in the treatment of chronic disease, including Type II diabetes,” Mendelsohn added in a statement from August. “We are also committed to identifying a sustainable path forward to bring Second Sight’s Orion visual cortical prosthesis system to individuals who are blind due to a wide range of causes.”

Another major deal came from the biopharmaceutical industry.

The deal also includes the start of a long-term strategic supply agreement that will have Fujifilm Diosynth provide Atara with the capabilities required to make its clinical and commercial cell therapies.

The 90,000-square-foot facility will also be used by Diosynth to manufacture cell therapies for other companies. The manufacturing and quality staff that worked there under Atara switched to working under Diosynth.

And, lastly, there was a big deal that never got completed. Lockheed Martin Corp. announced on Feb. 13 it would terminate its agreement to acquire Aerojet Rocketdyne Holdings Inc. in a deal valued at $4.4 billion.

The decision came because the Federal Trade Commission filed a lawsuit at the end of January seeking a preliminary injunction to block the deal between El Segundo-based Aerojet Rocketdyne and Bethesda, Maryland-based Lockheed, the company said in a release.

Aerojet operates a rocket engine manufacturing site in Chatsworth, where it is currently building the RS-25 engine for NASA’s Space Launch System rocket to take humans back to the Moon and on deep-space missions. Lockheed owns the Skunk Works facility in Palmdale, where it handles classified contracts with the U.S. military.

“However, we determined that in light of the FTC’s actions, terminating the transaction is in the best interest of our stakeholders,” Taiclet said in a statement. “We stand by our long heritage as a merchant supplier and trusted partner and will continue to support Aerojet Rocketdyne and other essential suppliers in the Defense Industrial Base still overcoming the challenges of the pandemic.”

The transaction was originally announced in December 2020 and was expected to close in the second half of last year. The FTC, however, sued to prevent the deal from taking place.

“If permitted, the proposed acquisition would allow the combined firm to use its control of Aerojet to harm Lockheed’s rivals in ways that would substantially lessen competition in multiple markets for products critical to the national defense,” according to the FTC complaint filed Jan. 25.

The complaint alleges that post-acquisition, the combined firm would have been incentivized to allocate Aerojet investment dollars for the combined firm’s benefit alone, which would stifle innovation, according to a release from the FTC.