New Year Will Be Different While Having Baggage of Past 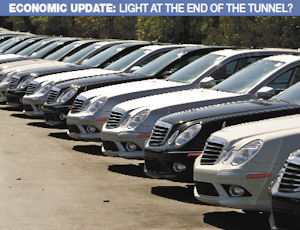 As the new year begins, California is struggling to crawl out of the economic pit it has been in the past few years. Economists, however, are more optimistic for the second half of the year when job growth is expected to keep pace or even exceed the nation as a whole. In the meantime, differences will emerge from the previous year, from the obvious to the subtle: a new governor, new spending patterns, new restrictions and regulations, new ways to be entertained. What won’t be new is the lackluster performance of the state’s economy. In fact, not much will change from 2010 as much of the residential and commercial real estate markets will stay in the dumps. “In general California is going to lag the U.S. and be weaker,” said Bill Watkins, director of the Center for Economic Research and Forecasting at California Lutheran University in Thousand Oaks. But locally, both Watkins and the UCLA Anderson Forecast foresee some improvement toward the latter part of the year. The Anderson report puts growth in employment at 1.6 percent for 2011. Nationally, job growth can be detected more by region than any industry sectors, with the middle of the country from the Dakotas to Texas doing the best, Watkins. In California, industries doing the best are health care and government. Tourism and hospitality has done better than expected as residents stay within the state rather than going off on vacations to the East Coast or Europe, Watkins said. Return of the auto Consumer habits will be different when it comes to car buying, at least that is what is being seen by Adam Slobin and Bryan Weissman, of DriveWise Auto, an auto-buying and leasing firm in Tarzana. A lingering effect of the poor economy is a reluctance to be flashy or ostentatious when buying a vehicle. Whereas in the past DriveWise clients may have gone with a large SUV like a Tahoe or Denali, now they eye a midsize SUV or cross-over, Weissman said. Car sales will continue to rise in 2011 with the U.S. carmakers being a big recipient of those purchases. In fact, Slobin goes as far as saying 2011 will be a revival of the U.S.-made car. “With the trimming of the fat (the Big Three) have done they are gaining momentum and getting great safety reviews,” Slobin said. A tech year Technology is also in an expansion mode, according to Ben Kuo, founder, publisher and editor of socalTECH.com, an online publication that provides coverage of Southern California tech companies. More importantly what the new year may bring is more tech companies moving from being privately held to becoming public. “When companies do that it spurs new companies and encourages others in the technology world,” Kuo said. One technology advancement sure to be discussed more is cloud computing. The discussion, however, won’t be limited to just how businesses can access needed applications through the Internet but also consumer use. E-mail programs and customer relations and sales software is available through the cloud, so why not a favorite TV show or movie clip? More and more entertainment content will be stored in the cloud in 2011 if not by 2012 and that in turn will bring changes in how consumers pay for broadband access, said Marty Shindler, a consultant working at the nexus of entertainment and technology. This will speed up the accessing and viewing of content anywhere and anytime a viewer wants and is related to “cord cutting,” another term like cloud computing that may be heard more in 2011. Cutting the cord means not buying video programming from a cable company or telecom but instead accessing it through downloads or streaming services to a lap top or mobile device. “Some of that is a bit generational starting with the younger generation that has always had these devices,” Shindler said. “It is going to spread up the chain to the rest of us adults.”