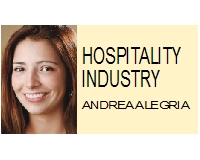 Despite indications that the national restaurant industry is still on a downward spiral, the crowds of hungry smiling residents at the Taste of Downtown Burbank fundraising event Oct. 1 seemed to make all memory of a recession vanish, if only for a night. The event sold 1,600 tickets, a 20 percent increase over last year, and raised more than $45,000 for the Burbank Community YMCA’s scholarship fund, which makes the YMCA’s programs affordable to those in financial straits. Although last year’s event coincided with the Sarah Palin and Joe Biden Vice Presidential debate, which might have kept many residents at home, the great turnout this year was still, for some, a small sign of recovery. “I think people here in the area are feeling like we’re a bit on the rebound,” said Susan Sebastian, Senior Marketing and Communications for Burbank Community YMCA. More importantly, for the 32 area restaurants that moved outdoors that evening to serve samples of their best food while bands performed on a stage at Palm and San Fernando, the event could not have been a better opportunity to reach out to new customers in a weak economy. “It gets your name out there to people that may not normally walk through your doors, and anything to get people to walk through your doors is important right now,” said Jackie Duryee Manager of Barneys Beanery, while she offered all beef or vegetarian chili to a long line of hungry customers. The event was especially important for those who have been hardest hit by the economic downturn. Restaurants like Guantanamera could not afford to miss it. “We’re at a 30 percent drop in business,” said manager Annabelle Pacheco. “We keep our doors open because we’ve got such repeat clientele, people that are there every weekend. If it weren’t for them we’d probably need to close our doors.” In an effort to attract customers the restaurant has started offering $6 lunch specials and has even extended those specials to the dinner menu. Pacheco said she was hopeful the restaurant would benefit from the exposure and the promotion it was receiving at the event. Similarly, Joey Gonzalez, general manager of Fuddruckers, said he expected that by promoting the restaurant through direct contact with customers, allowing them to sample their “build your own” burger style, customers would trickle back to the restaurant in the coming weeks or months. “This is huge because I give out “bounce back” cards (that give the guests incentives to come back to the restaurant over the next two months), to every person that walks through my line so I get this business back,” he said. The burger joint, a staple in Burbank for 21 years, has faced an onslaught of competition in the recent months. Among its competitors are newcomers Barney’s Beanery, Z Pizza, and Buffalo Wild Wings. “We’ve had seven new restaurants open in the last eight months within 100 yards of us, so it’s affecting us right now. But we’ll bounce back, we always do. We’ll take a little soft period here for about a year and we’ll bounce back,” he said. Buffalo Wild Wings recently opened in Burbank September 21 and Manager Tom Law, was beaming at the event. Serving nachos, chili con queso and their signature wings, it was a perfect opportunity to let people know they were there, and introduce them to what Law described as a restaurant concept geared towards family, food and fun – and a place where the sports fanatic can also benefit from the 58 plasma TVs, and 12 big screen TVs. “It’s a concept that’s well received, the price point is very moderate, the service is fantastic and at the end of the day, as bad as the economy is, people still need to get out,” he said. Buffalo Wild Wings’ first location opened in Palmdale last October, a third location will open mid December in West Covina and there are plans to open ten locations in 5-6 years. The formula for staying on top: service, quality and price, he said, ranking them in order of importance. “I think the restaurants that have superior service like I believe we do and great product that’s consistent, will do well,” he said. “But pricing is important. You get what you pay for but you also need to price yourself in a market where people can afford to come and enjoy you.” Granville Cafe is also holding strong in the economic recession even with prices in the midlevel range. “Our restaurant is doing very well,” said General Manager John Massaro, while offering visitors macaroni and cheese, Thai chicken salad, and humus made in house. “The way to keep above the rest is with service and making sure your quality stays high. It’s basically taking care of the guest because right now people can’t afford to go out for entertainment and go to a restaurant so you don’t only have to feed people, you also have to entertain them a little bit too,” he said. “It seems like price doesn’t really affect us too much. When you’re right in the middle of the road and you give them quality, that’s what they’re looking for. They understand what they’re paying for is what they are getting and they’re willing to pay for it.” Sadly, overall the restaurant industry is not doing to well. The National Restaurant Association recently reported restaurants continued to suffer from deteriorating sales and traffic levels in August. The association’s Restaurant Performance Index, which tracks the health of the U.S. restaurant industry – stood at 97.9 in August, down 0.2 percent from July- its third decline in the last four months. Staff reporter Andrea Alegria can be reached at 818-316-3123 or by e-mail at aalegria@sfvbj.com.