Fox Field Has Lots of Room to Grow in Lancaster 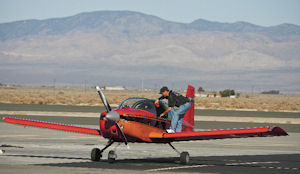 When the U2 took off from the runway at Fox Field in the Antelope Valley, George Prewitt didn’t need to look out the window to tell what kind of aircraft was making all the noise. Prewitt has been around aircraft much of his adult life and even in semi-retirement keeps his hand in it as a flying instructor at Barnes Aviation, one of a half dozen or so businesses located at Fox. Owned by Los Angeles County and completely surrounded by the City of Lancaster, Fox Field – proper name Gen. William J. Fox Airport – is an important part of the Antelope Valley economy with the potential to be more. Its 7,000-foot runway is longer than the two at Bob Hope Airport in Burbank and can accommodate aircraft larger than the single engine prop planes that often are taking off and landing. Surrounded as it is by empty land with the nearest residence miles away, Fox is, in the words of Prewitt, the gem of the county’s airport system and the only one with the space to grow. Out of 1,000 acres inside the fence line, only 35 percent has so far been developed. “We are a good location for a general aviation airport in that we are out of the airspace that exists in the L.A. area,” Prewitt said. When compared to other airports in the Antelope Valley it is easy to see why Fox Field gets little attention. Plant 42 in Palmdale has the major aerospace manufacturers developing the next generation of military aircraft. The Mojave Air & Space Port is home to the dreamers looking toward space. So that leaves Fox as the one place in the Antelope Valley where recreational pilots, small business owners who use their private planes, and the occasional corporate jet can go, especially as permission is needed to land in Palmdale. Airport’s value As a source of economic activity the airport is of limited value but there are factors in play that can change all that in the coming years. Fox has shown its value to the Boeing Co. which this year started shuttle flights from Seattle to bring personnel, parts and equipment to Southern California. Other companies with either facilities in the valley or scoping out locations also find the small airport to be handy. “The executives fly in here, check things out and then fly out,” said Andy Ma, the director of operations at Barnes Aviation. Barnes Aviation has been at Fox Field for nearly as long as there has been a Fox Field The fixed-base operation was started by noted aviatrix Florence “Pancho” Barnes and later operated by her son William, who was killed at the airfield in a crash of a P-51 Mustang. Exodus Air Services, MH Aviation and High Desert Avionics Inc. would come later. Outside the airport’s boundaries there are large warehouses for arts and crafts supplier Michaels, drug store Rite-Aid, and foodservice distributor Sygma. The warehouses are located in the Fox Field Industrial Corridor, a master planned complex by the City of Lancaster. As city land completely surrounds the airport, it is zoned industrial to keep out non-compatible uses such as homes, schools and hospitals. “The city doesn’t directly own or operate the airport but they recognize the importance of having it here and take steps to protect it,” said airport manager Steve Irving. A synergy While the industrial corridor and Fox Field help each other out, Steve Gocke, a project coordinator for Lancaster, admitted that it has been slow going to get businesses to build there. A 200,000-square-foot facility on 40 acres proposed a couple years back got put on hold and since then there has been little activity. With large acreage of land unavailable in the San Fernando Valley and Santa Clarita and Valencia running short on industrial-zoned land, the Antelope Valley is the only place in Los Angeles with the space to build large facilities. In getting potential builders to look at the valley, the proximity of the airport would play a part in the decision-making process. “In the next 10 years it could have all kinds of impact on what kind of development takes place there,” Gocke said. Development on the airport itself had been long hindered by not meeting stringent water flow and quantity requirements of the Los Angeles County Fire Department. Switching from well water to city water now meets those requirements, Irving said. The airport is currently in the process of updating its master plan and working with a consultant to forecast what operations at Fox Field will be like in the next 10 to 15 years and how to accommodate the activity.